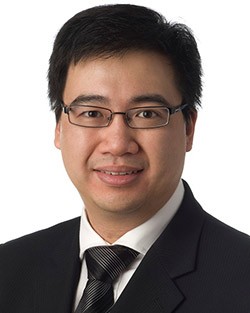 Bank of Korea and Bank Negara Malaysia have turned hawkish in recent statements, laying the groundwork for interest rate increases . . .

AFTER FOUR YEARS of depreciation, Asian currencies put in a much stronger performance in 2017. Our Asian currency index shows a gain of 4.6% year-to-date against the U.S. dollar.

How Asian currencies fare in 2018 will depend on which of two contrasting forces dominates: (i) the effect of policy normalisation in the major advanced economies on capital flows to emerging markets; or (ii) a strengthening and broadening of Asian economic growth with export recovery spilling over into domestic demand.

The U.S. Federal Reserve has embarked on balance sheet reduction, and looks set to increase the fed funds rate by another three 25bps moves in 2018.

Alongside implementation of tax reforms and continued economic expansion, these moves are supportive of the U.S. dollar. In addition, the ECB has reduced its asset purchase programme, and looks set to wind it down towards the end of 2018.

When the major advanced-economy central banks embarked on quantitative easing, the liquidity unleashed saw large portfolio flows into emerging markets, including Asia, driving up local currencies. A withdrawal of central bank liquidity should see some reversal of that. Hence, some volatility in capital flows is to be expected, which will be a drag on Asian currencies.

But global growth prospects have improved, helping Asian exports recover in 2017 after more than two years of being stuck in a trade recession.

The export recovery is set to be maintained into 2018, with an expected pick up in capex spending in G3 helping sustain Asian export momentum.

Eventually, the export recovery should broaden to support domestic demand in the region.

The improved macro-economic environment in Asia, together with rising yields, should be supportive for currencies in the region. However, there will be greater differentiation by investors, and, as a result, we are likely to see more varied moves across the different currencies.

The Chinese yuan looks set to remain broadly stable now that capital outflow pressures have eased. The authorities will want to maintain the CFETS RMB Index within a stable range, even as they allow the yuan to be more market-determined.

The potential for onshore China bonds to be included in global benchmark indices is positive for the currency, if realised. Further opening of certain sectors of the economy to foreign investors will also help generate inflows. Easing of capital outflow measures will only occur if the authorities are confident there are sustained inflows to balance.

The Taiwan dollar and the Korean won are the two currencies most sensitive to growth prospects and portfolio flows. With both economies seeing strong upswings in exports, their currencies have benefitted as a result.

So long as the global outlook stays positive, and tightening by the U.S. Federal Reserve is carried out in a gradual manner, the TWD and KRW should be able to weather any volatility in capital flows. Interest rate increases by the Bank of Korea will be supportive of the KRW.

The Singapore dollar is expected to appreciate in 2018. We expect the Monetary Authority of Singapore to exit from its current neutral policy stance and to tighten in the second half. Singapore manages monetary policy via the exchange rate, so policy tightening will involve a strengthening of the nominal effective exchange rate.

Hence, we expect the S$NEER, which is currently at 1% above the midpoint of the policy band, to move towards the upper bound by mid-2018 in anticipation of a tightening, and to appreciate broadly in line with the slope of the band. 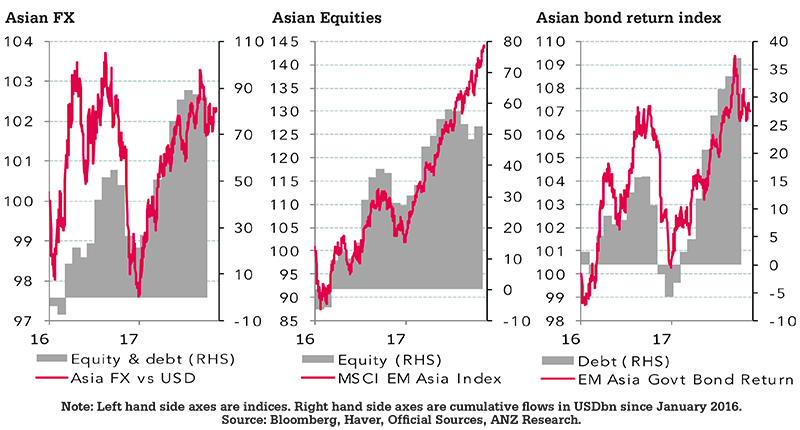 As a commodity exporter, Malaysia saw its ringgit come under severe depreciation pressure when oil prices started to slide in 2014. The recovery in prices due to improved global demand, in addition to improving Malaysian growth, has stabilised the ringgit. Bank Negara’s  signal that interest rate increases look likely early next year should provide some support.

India and Indonesia attracted strong foreign inflows in 2017 on the back of relatively high yields, reform stories and policy easing by both central banks. This has helped their currencies, despite economic growth slowing in both countries.

As both countries run current account deficits, the India rupee and Indonesian rupiah will be susceptible to any volatility in capital flows. The ability to continue attracting foreign inflows in an environment where U.S. interest rates are rising rests on continued reforms and improving macro-economic fundamentals, particularly on their external and fiscal deficits.

One positive that both countries have in common is adequate FX reserves cover, thanks to a deliberate strategy of accumulating reserves during periods when capital inflows were strong. The reserves buffer allows the Reserve Bank of India and Bank Indonesia to smooth any currency volatility, minimising the impact on domestic financial markets and the real economy.

The Thai baht and Philippine peso are two polar opposites. The THB is one of the best performing Asian currencies in 2017 — the PHP is the worst.

In Thailand’s case, a large current account surplus is the main driver of THB strength.

One big difference between Thailand and other current account surplus countries like Korea and Taiwan is that very little of that account is recycled by residents. As a result, most of the foreign exchange earnings are converted into local currency, pushing up the value of the baht.

The Philippines, after years of running current account surpluses, has gone into a small deficit this year due to strong import growth.

Unlike India and Indonesia, which are able to attract strong foreign portfolio inflows to fund their current account deficits, the Philippines has not been able to attract sufficient foreign inflows, leading to currency weakness.

Further divergence between the two currencies in 2018 looks likely, with a continued strong current account surplus in Thailand to support the baht while further deterioration in the Philippines current account deficit would see the peso come under further weakness.

Finally, while not strictly an Asian currency, the Australian dollar can at times be highly correlated with them.

We see the AUD appreciating past the 80 cent mark against the USD in 2018, for three reasons.