PALM OIL, NOT POLITICS – WHY MALAYSIA KICKED OUT AN AUSTRALIAN SENATOR 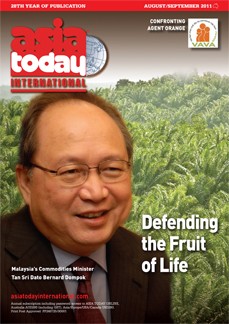 THERE is more than domestic politics to the decision by Malaysia to expel an Australian Senator. Nick Xenophon is seen as wanting to damage Malaysia’s palm oil market in Australia –an attack on a core sector of the Malaysian economy …

MALAYSIA bears a grudge against the Australian independent Federal Senator, Nick Xenophon, that goes deeper than his purported attempt to interfere with local politics. Xenophon was briefly detained by Malaysian authorities and then deported last week because the Government considers him "an enemy of the State”.

Xenophon claims the only risk that he poses is an ability to embarrass the Malaysian Government because of his advocacy for clean elections in Malaysia. The reality is that Malaysia probably started to regard Xenophon a persona non grata from 2009, when he started a vigorous campaign, with the support of the Australian Greens, to change the labelling of palm oil in processed food.

Xenophon maintains that people have the right to know what goes into their food. Unlike vegetable oils, which have polyunsaturated fats, palm oil contains mostly saturated fat. Xenophon has argued that the average Australian consumes 10 kilograms of palm oil through processed food every year – and that these consumers deserve truth in labelling of the food they consume.
The proposed legislation was strongly opposed by the palm oil industry – not least by Malaysia - and by the Australian Food and Grocery Council. Xenophon failed to get the support of the Opposition to get the Bill passed, but it is not dead. He is looking at a way of resurrecting the legislation.

Xenophon shares the belief of environmentalists the world over that the rapid of expansion of the palm oil industry in Malaysia has eroded the natural habitat, especially that of the endangered primate, the orang utan. He says experts believe that, at the current rate, the orang utan population in the wild will be wiped out by 2013.

Claims like this raise the hackles of Malaysians, not least Bernard Dompok, who is the Minister for Plantations and Commodities. Back in 2011, Dompok led a business delegation to Australia to defend his country's record in both the palm oil and timber industries (see ATI Magazine, August 2011).

Like most Malaysian ministers, Dompok is distrustful of the agenda of non-governmental organisations (NGOs) and feels threatened by them. NGOs wage international campaigns against countries like Malaysia on a range of issues. On his Australian visit, Dompok told ATI that NGOs were trying to label the cultivation of palm oil as destructive of the environment.

Malaysia is the world's second-largest producer and the biggest exporter of crude palm oil, an industry now regarded as "forming the economic backbone of Malaysia". Palm oil is Malaysia's most valuable agricultural crop, with annual exports of palm oil and palm-based products valued at RM80.41 billion in 2011. It is poised to register a new record for 2012, and, indeed, to continue to surpass its 2011 record in the next three to five years.

As a newly-industrialised nation, Malaysia’s manufactured products, led by electronics and electrical goods, generate the bulk of its exports receipts. But resources and commodities continue to play a key role in its economic development.

Dompok told ATI that commodities have an important multiplier effect on the economy as a whole, in particular on job creation. Unlike the electronics industry which imports most of its components, agro-based industry uses home-grown raw materials.

Dompok said then: "If you talk about the palm oil industry, we (have) about 600,000 people employed directly or indirectly in the sector. The timber industry employs 133,000 people, contributes 3.7% of our GDP and accounts for 3.5% of our total merchandise exports. These are industries with a lot of spin off. If we look back to the economic challenge in 1997-98 (the Asian financial crisis), it was commodities, especially palm oil, that stood the ground for Malaysia."

By a quirk of nature, Malaysia has found itself located at the heart of the right geographical region for palm oil. "It grows best in certain climate conditions, with plenty of rainfall, located seven degrees north and south of the Equator,” says Dompok. “We are blessed geographically. We call it - the fruit of life."

However, increasingly, good geographical fortune has become a source of grief for Malaysia because of global campaigns to protect the environment. Malaysia has long borne the brunt of global criticism, from logging of old tropical forest to its economic and political policies (remember its Bumiputra policy to the saga of Anwar Ibrahim?). That in turn has seen development of a siege mentality towards international criticism - and Nick Xenophon just happens to be one of those individuals that Kuala Lumpur has taken a dislike to.