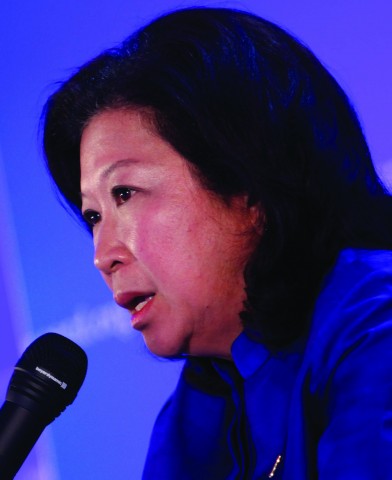 CREATIVE economy has been defined as creating economic value from existing knowledge and/or technology, says Mari Pangestu, who has added this new responsibility to her Ministry of Tourism portfolio,  to nurture future growth . . .

JAKARTA — When one of Indonesia’s most talented and respected Ministers, Mari Pangestu, was appointed to head a new Ministry to include Creative Economy, questions were asked: What is it all about?

Indeed, when appointed, she asked herself: “What is Creative Economy?”

“It turns out that there is a whole body of literature of people who have been working in this area, she told ATI. “Creative economy has been defined as creating economic value from existing knowledge and/or technology.”

Pangestu is one of three Ministers in the world to hold a portfolio with responsibility to develop a creative economy. The United Kingdom and South Korea both have Ministers to take charge of what seems to be an important future growth industry.

“The UK and Korea have clear direction of what they hope from a creative economy,” says Pangestu, a Minister for the past nine years (she was one of five finalists listed to succeed Pascal Lamy as Director-General of the World Trade Organisation).

South Korea’s President, Park Geun-hye, recently spoke of her plan to add 2.4 million jobs over the next five years through creative economy. Britain has one of the world’s most successful creative industry sectors, worth more than US$53 billion a year.

“Indonesia’s advantage is our cultural heritage,” says Pangestu. It is one basis for the competitiveness of our creative economy. The other aspect is ideas-based, and for that, the basic input is creative people.”

Another string to the bow is technology, and Indonesia’s domestic market is well connected through mobile technology. “Countries have the ability to grow in a creative economy, starting with the domestic market, whether it is film, music or performing art,” she says.

Pangestu has organised her Ministry into two streams — arts and culture-based, and other media and design-based — each under a Director-General.

While there is undoubtedly an economic contribution to the country coming from activities such as outsourcing designs for global architectural firms or for animation for films, it is difficult to measure their value.

“We have no idea of how big the industry is. We know, for instance, of a media company, based in Batam. It is doing outsourcing for Walt Disney and all kinds of companies. Half of the movie Garfield was made in Batam.”  The company, known as Infinite Frameworks Studios, now has a large Hollywood-style production studio, and is currently filming a television serial called Serangoon Road, set in 1960s Singapore. It employs some 350 people on animation.

“The studio is not alone. There are others scattered around places like Bandung,” Pangestu says, “but we have no idea of the value.”

She says it is much easier to value something more concrete, like fashion or handicrafts. Indonesia is developing as fashion centre for Muslim fashions, attracting fans and buyers from Malaysia and the Middle East. Indonesia’s aspiration is to become a full-fledged fashion centre for the Muslim world by 2025.

“But the question is: how do we get there?” she says, adding that she has one year (before a change of Government) to put the policy in place and to put the show on the road, so to speak. Just as she has done with tourism, Pangestu has worked out that the best
approach is to divide the whole industry into sectors and to develop performance targets for each of these sectors.

The easier part of her portfolio is tourism, an industry which increasingly attracts the commitment of governments. “It is all about jobs, says Pangestu. US travel industry research shows that, for every 35 foreign visitors, one new job is created. More countries are placing a priority on tourism because it employs young people and they do not require a lot of training. They are trained on the job.”

She says Indonesia’s neighbours — Thailand, Singapore and Malaysia — are way ahead in the development of their tourism industries. “My job is to advocate for policy change and to co-ordinate with other Ministries (and other countries),” she adds.

First on her plate is visa facilitation. Indeed, she is seeking to convince her ASEAN colleagues that the way forward is to promote ASEAN as a single destination. That means giving tourists from outside the region a single visa to visit countries within ASEAN.

“All the Tourism Ministers and Foreign Ministers are in favour, but our immigration and internal security people are cautious,” says Pangestu, who is an alumni of the Australian National University. Already, Thailand and Cambodia have an agreement which allows someone who holds a visa from one country to enter the other visa-free.

She says the Mekong countries are planning to adopt the visa-free approach. Initially, she will try to push for at least Singapore, Indonesia and Malaysia to work on the concept of a common visa. If she pulls it off, Indonesia can
expect a boost in the number of arrivals as tourists visiting Singapore extend to Indonesia.

Pangestu argues that, basically, countries have to get rid of the notion of reciprocity. Studies have shown that if visa restrictions are removed, there is an almost immediate lift in tourist arrivals — and this translates into revenue, foreign exchange and jobs.

“We are seeing interesting innovation in this area,” she says. “Mexico and some countries now accept the US visa. It is very clever. If you pass the stringent US security requirements to get a US visa, then you are an okay person. So these countries are actually piggy-backing on US security clearance.” The European visa, Schengen, which permits a visa holder to travel throughout the 26 EU countries, is another innovative idea, she says.

Pangestu has also been busy defining the opportunities which Indonesia can capitalise on to grow its tourism industry.

Hopefully, Indonesia will not be another Johnny-come-lately, but will rather be able to offer the jaded tourist something more. “Our problem is that people know only Bali. Every Tourism Minister from 20 years ago has tried to go beyond Bali. I have the same challenge.”

Given its size and diversity,
Indonesia has much to offer — from diving, and yachting, to culinary experiences and the fascinating komodo dragons, found in a small number of Indonesia’s 18,000 islands, including Komodo Island.

Pangestu’s task is to harness these resources and to bring them to the global tourist. From of a possible list of 80 potential destinations, she has picked 16. Her focus is also to develop themed or special interest tourism — recreational sports; cycling; golf; history and culture-based tourism; health and wellness tourism; and MICE (meeting, incentives, convention and exhibitions).

“The issues to be addressed are accessibility and connectivity,” she says. “The infrastructure has to be in place before airlines will start to go into those places.” Indonesia has its share of low-cost carriers, including AirAsia, which has relocated its head office from Kuala Lumpur to Jakarta so that it can become a domestic company and take up domestic routes.

She says there is a boom in hotel investment, in all stars, but particularly in budget hotels — in part to cater for the domestic market. As percapita income rises, Indonesians are also travelling. But the big numbers will come from China and India. “The number of Chinese tourist arrivals grew at 25 per cent annually in the last few years.”